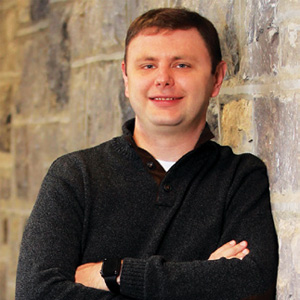 Dan Larimer, CTO
When Dan Larimer, a pioneer in blockchain technology, met Brendan Blumer, the CEO of Block.one in December 2016, Larimer was coming afresh from a series of successfully implemented blockchain applications— including BitShares, a decentralized exchange, and Steem, a website where users can monetize content. Together, they envisioned to work on a new project that would not only solve the technical challenges in the blockchain industry but will also support distributed applications with all of the benefits of the blockchain— transparency, security, process integrity, speed and lower transaction costs. “We realized that there was potential for us to work together and combine our skills to cater to a highly competitive market that brings the best of technology, business relationships, and finance to one platform,” states Larimer, CTO of Block.one. Over the next few months, Larimer and Blumer combined their complementary skill-sets to conceptualize the vertical and horizontal scaling of decentralized applications through Block.one. Today, the firm delivers EOS.IO Software that leverages decentralized applications and smart contracts to simultaneously support thousands of transactions per second.

To successfully build a blockchain software, organizations require skilled programmers to deliver high-perfection and deterministic code. “It’s very challenging to find and train people who can build a seamless software code and even if they can do it, there is a probability that even the best developers can make mistakes,” adds Larimer. The other factor that negatively impacts an organization’s blockchain efforts is the leveraged encryption that makes them unable to scale to the size of the intended user-base or build easy-to-use applications. EOS.IO Software empowers developers to build applications that are tailored for their ultimate end-users. The vertical and horizontal scaling of decentralized applications is achieved through an operating system, which allows developers to build blockchain applications on top of it, mitigating the chances of mistakes in the code.

Users are provided with accounts, authentication, databases, asynchronous communication and the scheduling of applications across multiple CPU cores, which results in a blockchain architecture with a potential to scale millions of transactions per second.

Block.one’s goal is to bring blockchain to businesses through our platform which offers unprecedented levels of scalability

Larimer adds, “This is different than other blockchains in which essentially every application runs on the same network, get into single file line and then processes one at a time.” The process also eliminates the need for user fees and allows for quick and easy deployment of decentralized applications. “Block.one’s goal is to bring blockchain to businesses through our platform which offers unprecedented levels of scalability,” says Larimer. Further, the firm uses open-source approaches to deliver the software, which enables organizations to download and customize it according to their needs. Alternatively, they can also leverage the software while it is delivered by a third-party vendor and can deploy their applications on it. “Firms can either modify the core blockchain or can build their applications on an existing blockchain using smart contracts enabled by the software,” says Larimer.

A blockchain veteran, Larimer believes that through Block.one’s EOS.IO, the firm would be able to make it easier and scalable for organizations to leverage the blockchain technology and reap business value. Having been involved in many such successful endeavors, he believes that his experience will complement the skill-sets of Blumer and will prove to be foundational building blocks of this innovative project. Block.one has been instrumental in devising a cornerstone for faster and secure transactions and aims to work on improving the software’s performance and scalability, and develop and deploy its own end-user application in the near future. 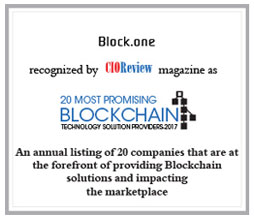