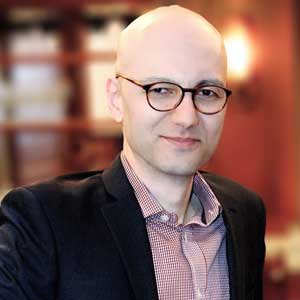 Gaining operational efficiencies by removing the need for central coordination is the core value proposition of blockchain. As a secure ledger of peer-to-peer transactions, blockchain leverages the power of decentralized networks to validate each unit of activity. A peer, often referred to as a node, makes several contributions to the network, including storage of data and allocation of computing and processing power. The nodes can record instances of information in blocks that are each linked to previous blocks of transactions, all validated through peer consensus. Logging transactions this way makes the process not only transparent, but also secure. Tampering with one node can have no impact on the integrity of the data, which is digitally signed, time-stamped, and distributed widely across multiple nodes for eternity. Additionally, a combination of public and private keys brings robust cryptography to the network while protecting the identity and privacy of those conducting the transactions.

Among the many advantages of blockchain, decentralization is the key feature that can accommodate new ways of handling any digital asset

Decentralization, security, privacy, and immutability of transactions were essential to the success of blockchain for exchanging cryptocurrencies. In 2008, Satoshi Nakamoto, a still unknown person or persons, published a white paper on bitcoin, the first successful cryptocurrency, as a peer-to-peer electronic cash system than can be exchanged on blockchain without the involvement of a financial institution. After turbulent beginnings, bitcoin scaled rapidly with substantial gains in value from nearly $0 per unit in 2009 to over $6,000 as of this writing. As a new currency bitcoin has several unique features, most notably the fact that it’s not pegged to traditional standards such as gold or monetary policy set by a central bank. Bitcoin’s value is driven by demand in a distributed network outside traditional banking and financial assemblies. Previous attempts at creating cryptocurrencies never scaled due to the absence of the self-propagating and decentralized substrate made possible by blockchain. Since the advent of bitcoin, other cryptocurrencies emerged, each with varying degrees of success that collectively represent a newcurrency market with a market cap of about $750 billion today. In the bitcoin implementation of blockchain, special nodes known as miners assume functions that are conventionally performed by financial institutions, conducting a series of complex computational tasks to validate transactions. Miners compete on the network and are paid fees for successful validation of transactions in blocks that are sequentially added to the chain.

The success of bitcoin has inspired a dynamic debateas stakeholders aim to identify new use cases for the underlying technology. Among the many advantages of blockchain, decentralization is the key feature that can accommodate new ways of handling any digital asset: from health data to data generated as part of the complex series of events in supply chain management. Conducting transactions on blockchain can be facilitated by not only miners, but also highly customizable smart contracts. After satisfying a set of pre-programmed rules, smart contracts automatically execute legally-binding agreements that can obviate the need for human-guided judicial interpretation.

Despite the great potential, the key benefit of blockchain, i.e., decentralization, is ironically the feature that poses the most significant barrier to developing sensible business models for use case beyond cryptocurrencies. Given that the largest gains in efficiency are through decentralization and delegation of transactional functions to miners and auto-executable smart contracts in a distributed network, having an entity impose a business model onto the chain can create unnecessary central control, defeating the purpose of using blockchain. Resolution of this paradox has been the focus of new business models with modified blockchain implementations such as private networks and proprietary smart contracts. To date, none of these implantations have enjoyed the success of truly decentralized configurations. Blockchain is far from being a suitable substrate when the value proposition is derived from proprietary governance over transactions or ownership of the technological foundation. Successful online retail companies with standard proprietary platforms can manage an hourly load of millions of transactions with impressive precision and scalability. There are limited incentives for such companies to decentralize activities by moving transactions from their central control to blockchain, countering their value as branded business entities.

The unresolved paradox of extending the advantages of blockchain from the cryptocurrency market to a broader array of use cases aligned with sustainable business models calls for shifting focus away from modified implementations that compromise the integrity of the framework by breaking its autonomy and decentralization. The ideal blockchain implementation should be public, open, and accessible to everyone without any expectations for monetization of the core functions of the chain. Bitcoin’s success was heavily reliant on blockchain’s neutrality as a quiet substrate for managing transactions free from commercial interests. Similarly, successful application of blockchain for other use cases depends on retaining the integrity of the framework, placing in the background as a neutral substrate to enable new business models and not as a proprietary platform the monetization of which is the core business model.